If you ask Londoners what ice, snow and winter mean to them, they’ll probably mention roadblocks, severe tube delays and cancelled holiday flights.
They may have a point. However, while all of these unfailingly threaten to ruin the festive mood every year, the harsh British winter also offers a lot of opportunities to have a good time.
If you feel brave enough to defy the cold, a photo-walk all over London is definitely worth trying. So wrap up warm, and make sure your camera is well charged. If you’re unsure on what direction to take, here are a few tips to trigger your inspiration.

Camden Town is best known for its quirky market, shops and clubs, but to keen photographers it’s also an excellent vantage point over Camden Lock and Regent’s Canal.
While the bright colours of the market are the area’s most iconic feature, the white of snow is what makes it really beautiful on winter days. After each snowfall, Camden Town becomes the perfect setting for experimenting with black-and-white photography.
You’ll take the most sensational photos near the canal: the heaps of snow, the thin ice sheets, and the reflections of the boats and buildings nearby offer countless cues for interesting angles. Looking back at your pictures, you’ll find it hard to believe that you took them just a few steps away from Camden’s buzzing crowds! 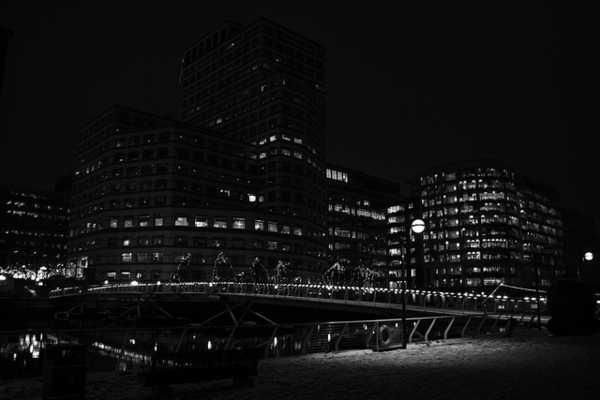 Canary Wharf is known for being one of London’s busiest financial districts.
The bustling professionals who populate it during working hours may all head home after 6pm, but its charm lives on even after its banks and offices close for the day.
For the best seasonal pictures, try having a stroll around the area after the sunset: winter nights turn Canary Wharf into another perfect setting for striking monochrome shots. With all but a few lights turned off in its impressive glass buildings, and its roads and pavements covered by a thick layer of snow, your pictures will look just like scenes from a black-and-white film.
There are, however, a few rules for the photographers who wander around the area – so make sure you read them carefully before planning your visit. 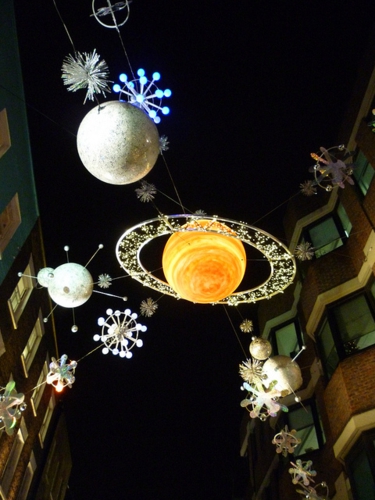 With December fast approaching, you’ll soon notice that Christmas is everywhere.
You’ll probably eat your first mince pie in October, spot the first mulled wine stands shortly afterwards…and as November slips by, witness London sprucing itself up for the festive season.
Many boroughs and streets sport the same Christmas lights every year, but London’s main shopping hubs are real prima donnas, never wearing the same outfit twice.
Regent Street’s 2012 installation is dedicated to the traditional carol “The Twelve Days of Christmas”, and Marmite (yes, that Marmite!) is the theme of Oxford Street’s decorations.
Carnaby Street’s light display, celebrating the fiftieth anniversary of the Rolling Stones, is also worth a picture: a real must-see for both rock fans and Christmas enthusiasts.

By the time you have taken all these photos, you’ll probably start to feel the winter chill.
It’s now time to head back to a warm place, have a hot drink and look through your pictures: feel free to leave a comment below, and let everyone know where your own winter photo-walk has taken you.

Federica is a passionate photographer. She is making the most of living in London by travelling around the city to capture some stunning scenes, which she likes to share through regular blogging. She works at Lenstore, an online contact lens shop. You can trust her to know how important clear vision is to catching that perfect snapshot.