In the interest of survivalist-minded citizens everywhere, we want to share with you this important missive that was pried from the cold, dead fingers of the walking dead. Be warned, take proper safety precautions, and don’t forget your Zombie Bullets.

BREAKING NEWS – Salt Lake City, UT – The Horde has been in retreat recently due to a group of human survivors who have evaded typical zombie-annihilation tactics. In the past, the Horde has easily routed the humans by surrounding them in densely populated areas, cutting off any means of escape, and multiplying themselves through rapid infection. However, a number of humans in Heber City have dispersed and have entrenched themselves throughout wilderness areas outlying the city despite obvious need for food by our young.

Ordinarily, those of the tasty-brained race who escape either die off in the wilderness from starvation or injury or return in desperation to the city, seeking food or medical help. There they fall prey to hungry Horde scouts. The more cunning humans have lasted outside of the cities through new and previously unheard of survival strategies. Please continue reading to learn of the latest human survival tactics and be aware that traditional apocalyptic onslaught methods may not succeed against these unusually intelligent survivors.

Camping in Remote Areas
The usual human tendency to cling to their homes and other familiar areas during a crisis has, unfortunately, been completely reversed by these crafty specimens. In large groups, the humans are easily surrounded and infected on a mass scale. However, dispersed among the wilderness, they are far harder to track, and zombie infection epidemics spread much more slowly or not at all.

It seems that humans do not actually need all of the vehicles, technology and conveniences they usually surround themselves with. In a crisis, they can subsist on minimal supplies and sleep in tents on the ground. This practice is known among the humans as “camping,” and when implemented, it is a very successful defense strategy. So far, the Horde has failed to develop an alternate plan of attack in response to “camping.” 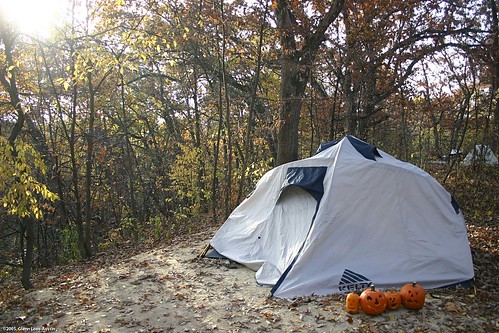 Emergency Food Supplies
At the outset, the camping strategies were of little concern to the Horde. It was expected that the humans would soon return to the city to scavenge for food. However, Horde scouts have discovered that many of these survivors are equipped with large stocks of emergency food supplies – some of which are great enough to feed a family of four for several months. Much of the food consumed out of these supplies requires little or no cooking, and the cheerful faces of the humans seem to indicate satisfaction with what is eaten. Rather than finding humans fearful and desperate, Horde scouts report that these camping humans are happy, secure and completely disinclined to return to the zombie-dominated cities.

Medical Supplies
The human weakness of requiring nearly full body assembly to function has also historically guided the humans back to sources of healing supplies. Because humans feel the need for healing from even minor, non-limb-severing injuries, their need for medical aid is very frequent. A fall of only a few yards, even a stumble or a bite from certain living reptiles or insects is enough to bring them clamoring back for help. Unfortunately, these human survivors have obtained medical kits which enable them to treat their various ailments without having to return to city doctors and hospitals. If any information on how to prevent humans from adopting these or other survival strategies is known, please contact Zombie News.

Meg Jones writes about all sort of subjects that entertain her and might be of interest to others as she works from home and is glad there are no real zombies.