Breast cancer is one of the most common forms of cancer being detected around the world. In 2010 there were 49,564 women diagnosed with invasive breast cancer in the UK alone, the mortality rate sat at 11,556 and there was a seventy seven percent survival rate.
Breast cancer risk is determined by a number of factors including your age with women over sixty nine being in a higher risk category, your family history, weight, diet and alcohol consumption.
This year there have been improvements when it comes to breast cancer. While there are more than 48.000 women being diagnosed with breast cancer each year the survival rate has increased to 81.6%, which is a positive sign as new technologies and research are introduced to limit breast cancer.

There are a number of technologies already being used to detect breast cancer. As with any cancer the sooner it is detected the higher the survival rate. Mammography is the most commonly used form of technology throughout the world these days and it offers doctors a clear picture on what is going on in the breast and helps with early detection.
CAD is another option which is only used in a few clinics. CAD stores information which is used to detect cancer risks. This technology pinpoints increased risks, but in some cases does offer a false positive, which can be traumatic to the patient.
Tomosynthesis digital mammography is another technology that is used in some clinics which offers a three dimensional image to help doctors detect the cancer early on. This technology also offers a reduced number of false positives.
Another form of technology they is used in some instances is ultrasound with doctors believing the ultrasound can pick up on things that the mammography didn’t see.

There are a number of new technologies being introduced to help with early detection and to reduce the risk of the cancer coming back. One of these technologies is the Margin Probe which is a device used during surgery to reduce the patient having to come back.
Normally a patient would undergo surgery to remove the cancerous cells, the surgeon will cut away tissue with an added margin, but there is no guarantee that the cancer hasn’t spread beyond this point which means the patient may need to undergo surgery again a few weeks later.
The Margin Probe enables the surgeon to scan the tissue while the patient is under anaesthetic and still on the table, the probe completes the scan within twenty minutes so if further tissue needs to be taken it can be done there and then reducing the risk of leaving any cancerous cells behind. 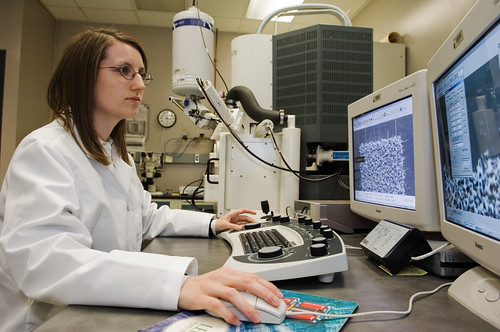 NASA is also in the process of developing the Smart Probe to help with diagnosis. As the moment a woman will have a needle injected into the tumour and that is then sent to the lab for a biopsy.
The Smart Probe will speed up the process and while working in a similar way it will diagnose the tissue while helping doctors and specialists understand cancer and how it develops. The probe will use a 3D MRI or sonogram enabling the doctor to identify the cancer there and then ensuring early detection.
The advantage to the Smart Probe is it will offer a smaller incision site and it uses tiny sensors which takes measurements of the tumour along with analysis.

While there are technologies currently being used and new technologies being introduced to help fight breast cancer, reduce mortality and repeat cancer risk, there are also a number of technologies currently being researched.
The Gene Expression studies are still undergoing testing. No one can predict who is at higher risk of developing breast cancer and who will need to come back for repeat treatments once their cancer has been removed. The Gene Expressions study uses gene patterns and links those to aggressive cancers.
Another test is the Tumour Cells test. Tumour cells can circulate in the body, they break free from the tumour and enter the blood stream. These need to be detected and quickly before they become aggressive elsewhere in the body which is what this technology is about, detecting the cells using specific laboratory tests.
Lastly is the Scintimommography tracer, this is still in the research stages and will use a radioactive tracer which will be injected into the patient’s vein. The tracer will attach itself to the cancer cells making it easy to detect using a specialised camera.