Fashion is a fickle thing. It has always been within the eye of the beholder, much like beauty itself. And what is fashion if not the reflection of attraction, creativity, and human expression?

While some fashion designers choose to turn their design into a statement, others put functionality and aesthetics in front of all else. Some even decided to express their wildest idea just because they can.

With fashion being a part of our everyday life, we have to get into the nitty-gritty that it brings to the table. How do fashion designers do it? How does one come up with the best ideas possible? The answer to these equations is imagination, creativity, and a whole lot of illustration.

What Is Fashion Illustration?

An illustration is one of the foundations of any design, especially fashion. There is nothing that ties the whole industry together, quite like that quick-expression of creativity. Illustration consists of drawing, painting, or sketching and design in the moment, or while the idea is still fresh.

Strike the iron while it’s still hot and strike down that idea once it’s still fresh. Fashion Design and Illustration go hand in hand, as they’re mutually inclusive.

Whether you’re designing something from scratch or building upon a foundation, you will need to illustrate it. Visually communicating your idea in its minimum face value is going to give you a foundation – the very essence on which your design is built upon.

Brainstorming and In the Moment Idea

Have you ever wondered why you’re full of inspiration in the most inconvenient of moments? That is because inspiration itself doesn’t come when you force it. Ti comes through a natural flow, and at times, it’s not always when you’re in front of your PC.

The evolution of illustration in the fashion industry has focused it mostly on electronic devices. Pen and paper aren’t the standard anymore and haven’t been for a while.

You don’t always have to solicit the services of professional illustration services. Keep a spare pencil and notebook in your bag, so if you have an idea, you can produce it at the moment. A fashion design illustration is only as good as it is fresh, crisp, and in-the-moment. 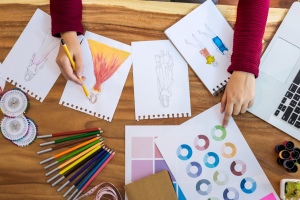 At a point, we’ve switched almost entirely to designing fashion on our computers. As with any novel invention with a specific intention, it has been the industry standard for a while. But unlike other things, fashion design through a computer has found its foothold in the industry.

Of course, some people still prefer to sketch and doodle their ideas to convey them visually, but most newer professionals seem to prefer digital ways to communicate the image.

The illustration itself has fallen out of fashion in the fashion industry until a beautiful merger between the two emerged. Fashion illustration is no longer exclusive to the sketchpad or a laptop/computer, as digital sketchpads and tablets are all the rage.

Tablets are the second most popular carry-on devices only surpassed by phones – and they’re beloved in the designer community. That is because they bring quite a lot of convenience to the table. Through tablets, you can sketch and doodle if you have an idea, and not waste time finding a pen and paper.

They also come with many perks, such as an internet connection, which allows you to get inspired while you’re browsing the internet, and instantly sketch your idea without having to pump up the PC or get a sketch pad.

Phones might not be the ideal medium for sketching your design, but they have one key advantage. We keep our phones in our pockets most of the day, and this availability allows professional fashion designers to write down their ideas, or make a quick doodle to help them when they have access to a more sophisticated designing device. 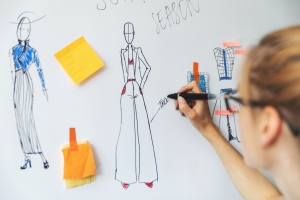 A sketch pad or a drawing tablet is a device that allows you to turn your paper doodles into digital doodles. The best design passes strict post-production, and the best way to get your idea into the digital landscape is through directly drawing it on a sketchpad.

A sketchpad is also highly useful if you’re a professional illustrator or fashion designer, and are looking to work on your idea both physically and digitally. Also, the significant amount of paper waste you cut down on by not throwing your failed designs away in the bin.

How to Communicate Your Fashion Design Idea?

Some fashion designers are absolute professionals in finishing up already built foundations. Some illustrators aren’t too good at expressing their ideas wholly through the visual medium.

The expression of creativity comes in multiple different forms. That is why books, paintings, and even spoken words can be considered art forms in one way or another.

Two heads are better than one, and simply conversing with another industry professional might broaden your perspective, and clear up your artistic blockage. Illustration, fashion, and any artform don’t work as well if it’s forced and rushed – it needs to be natural.

Fashion illustration has always been a part of the fashion design world. And the industry as a whole could not exist without its foundations. The best of the best that the fashion industry has to offer has started as a doodle on someone sketchpad, notebook, or tablet.

If you’re looking to get rid of a block, make your life easier, or outsource your needs, you’re best off contacting the best illustration services. Every artist has a block from time to time, which is the right way to get by it.

The coronavirus pandemic has seen many things change over this past year, and one of…